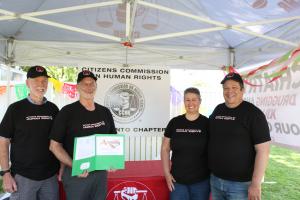 CCHR of Sacramento Cautions Parents to “Know Your Rights – Your Child’s Life May Depend on It.”

CCHR Sacramento received recognition for their participation in Kids Day in the Park 2022. 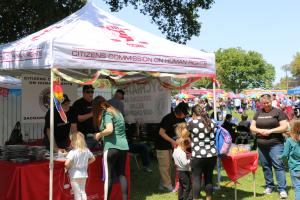 Hundreds of parents visited the CCHR booth and received the facts about the dangers of psychiatric drugs on children. 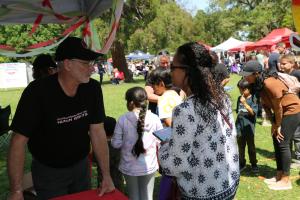 Jim Van Hill, Executive Director of CCHR Sacramento, talking to a parent about the dangerous, sometimes life-threatening effects of psychotropic drugs on children.

CCHR of Sacramento alerted hundreds of parents about the dangers of psychiatric drugs and mental health screenings at Rancho Cordova’s Kids Day in the Park.

SACRAMENTO, CALIFORNIA, UNITED STATES, April 28, 2022 /EINPresswire.com/ — The Citizens Commission on Human Rights (CCHR) of Sacramento got a head start on Mental Health Month with outreach activities at Rancho Cordova’s Annual Kids Day in the Park where they warned hundreds of parents about the dangers of psychiatric drugging of children and the harm that can result from mental health screenings. CCHR, a non-profit, non-political, non-religious mental health watchdog group, spread the message “Know your rights – Your child’s life may depend on it.”

7.2 million children in the United States are currently being prescribed psychiatric drugs—more than 620,000 are age five and under[1] even though there have been over 400 international drug regulatory warnings issued on these drugs[2] that are known to cause hallucinations, psychosis, aggression, hostility, anxiety, depression, life-threatening diabetes, heart irregularities and suicide.[3]

“Psychiatrists try to justify prescribing these dangerous drugs by claiming that the problem is caused by a brain disorder such as a chemical imbalance in the brain,” said Jim Van Hill, Executive Director of CCHR Sacramento. “Parents need to know that diagnosis of a mental disorder is strictly subjective. There is no medical or scientific test that proves it and child safety is of upmost concern to us” added Van Hill.

Psychiatrist Peter Breggin said, “Despite more than two hundred years of intensive research, no commonly diagnosed psychiatric disorders have proven to be either genetic or biological in origin, including schizophrenia, major depression, manic-depressive disorder, the various anxiety disorders, and childhood disorders such as attention-deficit hyperactivity. At present there are no known biochemical imbalances in the brain of typical psychiatric patients—until they are given psychiatric drugs.”[4]

This doesn’t mean that children do not experience emotional or behavioral problems. But these problems are not diseases and the drugs which so many are subjected to have serious, even life threatening risks. Additionally mental health screenings often lead to children being prescribed psychiatric drugs. This is an all too common occurrence. Research has shown that once a child is referred to and seen by a psychiatrist, nine out of ten children are prescribed a psychotropic drug.[5]

Psychiatrists do not usually inform parents about alternative, non-drug treatments; the subjectiveness of their diagnosis; or the drug’s dangers. Nor do they normally perform a thorough medical examination which could find a physical cause behind the symptoms.

“These omissions violate parents’ rights. In order to keep their children from harm, they need to know their rights and arm themselves with the documented facts,” said Van Hill.

By signing a Parent’s Exemption Form Prior to Mental Health and Psychological Screening or Counseling, parents can protect their children from mental health screenings that could lead to psychiatric intervention.

Furthermore, they should know that Federal law (Title 20 of United States Code: Chapter 33, Subchapter II, ASSISTANCE FOR EDUCATION OF ALL CHILDREN WITH DISABILITIES § 1412, State Eligibility) prohibits school personnel from requiring parents to drug their child as a requisite for attending school.

For links to the above two documents and other important information, go to “Parents: Get the Facts—Know your Rights” at www.cchrint.org. Parents can also call CCHR Sacramento at (916) 447-4599 for assistance.

The Citizens Commission on Human Rights was co-founded by the Church of Scientology and the late Dr. Thomas Szasz, Professor of Psychiatry Emeritus in 1969 to expose psychiatric violations of human rights and clean up the field of mental healing. Alerted to the brutality of psychiatric treatment by author and humanitarian L. Ron Hubbard who wrote extensively about the abuses of psychiatric patients, CCHR today stands as a powerful voice of reason for those abused and their on-going advocacy for reforms. For more information log on to their website at: http://www.cchrint.org/

[3] “Facts about the Dangers of Mental Health Screening in Schools,” Citizens Commission on Human Rights, file:///C:/Users/Mary/Downloads/facts_about_mental_health_screening_in_schools.pdf

[4] “The Difference Between a Medical Diagnosis and A Psychiatric Diagnosis,” https://www.cchrint.org/psychiatric-disorders/psychiatristsphysicians-on-lack-of-any-medicalscientific-tests/

[5] “Facts about the Dangers of Mental Health Screening in Schools,” op cit.
CCHR of Sacramento