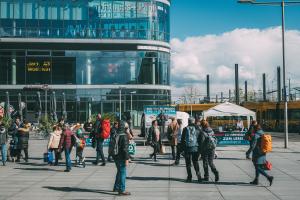 more and more citizens are informed of the Truth about Drugs

In an ever growing banalization and scandalous investments to promote its use, citizens are standing up to say enough is enough, providing truthful information

In an ever growing banalization and scandalous investments to promote its use, citizens are standing up to say enough is enough, providing truthful information”

LEIPZIG AND DRESDEN, GERMANY, April 20, 2022 /EINPresswire.com/ — In an ever growing banalization of drug usage worldwide, and very scandalous investments and attempts by vested interests to promote its use, more and more citizens are supporting healthy and drug prevention initiatives to bring the pandemic of drugs to an end, said Ivan Arjona, representative of Scientology in Europe.

This is the case for the information booths of the prevention campaign “Say NO to Drugs – Say YES to Life”, which took place in the second week of April (8 and 9), 2022. With music and many volunteers at Augustusplatz in Leipzig and at Prager Spitze in Dresden, the activity showed that many citizens are aware of the danger posed by the increasing use of drugs in society.

Numerous concerned and affected parents, social workers, teachers and also representatives of the authorities arrived to the information booths of the “Say NO to Drugs – Say YES to Life” association, which were set up in Leipzig and Dresden over the weekend. The association is part of a worldwide drug prevention campaign promoted in great efforts by members of the Church of Scientology but also by others, as it is a secular independent campaign, that has proven to be an indispensable activity.

Parents and teachers alike express their concern that young people are being turned to illegal drugs at increasingly younger ages. People report cases among their acquaintances where they had observed drug users mentally deteriorating.

The Truth About Drugs booklets is one one of the main prevention tools used by the volunteers of this German association “Say NO to Drugs – Say YES to Life”. Representatives of the police and the city’s addiction prevention authority read the numerous information booklets carefully and praised the high-quality presentation and the easy comprehensibility of the content conveyed. One policewoman implied that this is the type of content needed to fight drug usage “in our cities”.

Several volunteers – most of them members of the Church of Scientology – in alignment and support with what they have learned from research form L. Ron Hubbard, looked after the information booths and answered questions from passers-by, while providing a very well welcomed musical entertainment.

The association “Say NO to drugs, say YES to life” works closely with the international “Foundation for a Drug-Free World” and the Foundation for a Drug Free Europe, which in our continent gathers more than a 100 active groups in the main capitals. Their aims are to provide young people and adults with the Truth About Drugs so that, based on this knowledge, they can decide for themselves to lead a drug-free life.

No one, and certainly not a teenager, likes to be preached to about what they can and cannot do. Therefore, the association provides the facts that help teenagers decide for themselves not to use drugs in the first place. More and more youth are taking the invitation to participate in the “Truth About Drugs” campaign activities, which are simple but effective. People of all ages participate.

“Drugs are the most destructive element in society,” wrote L. Ron Hubbard, founder of the Scientology religion, back in the 1960s. So, with the help of volunteer activists, nearly 100 million of these booklets and other drug education materials have been distributed internationally. Tens of thousands of drug education events have been held in over 120 countries. “Truth About Drugs” tv spots have aired on 275 television stations. These materials and activities have helped people around the world learn about the destructive effects of drugs and thus either make the decision for themselves not to take them or help others make that decision.