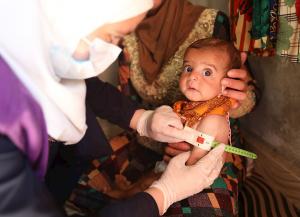 Lifesaving medical facilities for mothers and babies at risk

UNITED KINGDOM, May 9, 2022 /EINPresswire.com/ — International humanitarian NGO Human Appeal is highlighting the impending threat to future humanitarian aid in Northwest Syria, and its associated human cost, ahead of the 6th EU-hosted Syria conference taking place in Brussels on 10th May 2022.

The upcoming Brussels meeting will bring together the international community to address the ongoing situation in Syria, reconfirm political commitments, and mobilise financial support. The UN recently announced that the 11-year conflict has resulted in overall 14.6 million Syrians in need of humanitarian aid, and around 6.9 million internally displaced men, women and children. This represents the largest internally displaced population in the World today.

The major threat to future humanitarian aid comes in the form of a non-renewal of the UN security council cross-border mandate for the last remaining humanitarian corridor on the North-western Syrian/Turkish border.

There are two further key concerns overshadowing this meeting, which will impact both this vulnerable population but also severely limit the capability of international aid to reach them. . Firstly, the amount of health-related aid pledged by international donors being delivered in full is already being curtailed. There are 3.1 million in need of access to health care in Northwest Syria according to the UN. Last year, only 37% of the health-related aid pledged was met, and so far this year only 1.5% has reached those in need. The conflict has caused a severe disruption in health services. The UN estimates that 50% of the health facilities in Syria are either only partially functional or destroyed. This has left local populations with severely limited access to healthcare leading to increased vulnerability to communicable and non-communicable diseases.

The other key concern for the Brussels meeting is the sustainability of humanitarian aid reaching those who need it in Northwest Syria, coupled with the need for sustainable shelter. The Northwest of Syria has 2.6 million displaced people mostly in emergency tent camps. Such tents are designed for shorter term emergencies only, not a decade long as is the case in Syria. Human Appeal has begun building proper houses to start moving some of the displaced families from tents to homes that can shelter them properly particularly during harsh summer and winter weather. These modern housing projects will offer running water, schools and health clinics.

Human Appeal has been on the ground in Northwest Syria providing humanitarian aid since the conflict began. In 2018, its Al Imaan hospital was destroyed by airstrikes that also resulted in the tragic loss of one of its team members working as a pharmacist helping displaced families. Human Appeal relocated its hospital to a new location in Northwest Syria and continues to offer health care to the region.

An example of the human cost can be seen in the recent tragic case of a pregnant woman, Diana. She was brought to Human Appeal’s Al Imaan hospital by her husband after suddenly falling unconscious due to their dire living conditions as a displaced family. Diana was declared dead on arrival at the hospital, but the doctors managed to save the baby girl she was carrying. “Al Imaan hospital was the only medical facility we could find, and the doctors performed a surgery to save the baby in her womb. I feel sad and lonely since my wife passed away but the baby being saved has eased my suffering,” said Diana’s husband.

“Our concern is the dignity and human rights of Syrian people. There is currently no feasible alternative to humanitarian aid reaching the millions of vulnerable in Northwest Syria. The existing cross-border model can be trusted by both donors and beneficiaries. If this model is not renewed in July that will leave millions of Syrian civilians with no secure aid corridor alternative. However, we have a long-term commitment to continue saving lives in Syria no matter what obstacles are thrown in our way,” commented Raya Homsi, Institutional Funding Manager at Human Appeal.

Human Appeal insist decision makers at the upcoming 6th Brussels conference consider these issues and make decisions that help create an environment for millions of vulnerable Syrians that would protect and nourish uncompromised channels to build a civic space in Syria that is less vulnerable to interference, more immune to aid diversion, and less likely to entrench local divisions.

Human Appeal (registered charity 1154288) is a fully independent British development and relief NGO based in Manchester, UK. It was established in 1991 and runs targeted poverty relief programmes in collaboration with global organisations like the United Nations. Its mission is to save lives through emergency response and sustainable development programmes, across over 25 countries worldwide.

Human Appeal does not operate under any other name, there are no alternative versions of the official name and its only official logo is detailed on its website only.