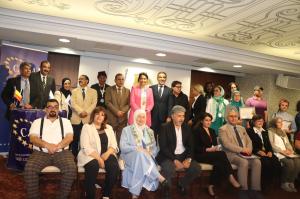 Several international delegations coming from Italy, The Netherlands, Germany, France and many other countries.

This Forum for Dialogue between Civilizations was held in the presence of intellectuals, scholars, artists, activists, and poets from Arab countries, including Kurds and Yazidis. They presented activities in their historical attire and in their beautiful culture, gaining public approval.

The event was organized in the Churches of Scientology for Europe. The forum started with an exhibition of Fine Arts and heritage of Arabic Calligraphy featuring three artists: Professor Maher Aziz from Sint-Truiden, French artist, Mrs Manal Thebian and Professor Arif Mahmoud from Verviers. They delighted the participants with their works and they made a guided tour with the explanation of the elements represented in each work.

The cultural forum opened with the speech of the president of the C.C.E.A.M., Mr Muhammad Al-Shammari who made a historical overview through the cultural contributions brought by the civilizations that followed, starting from the Mesopotamian one.

A documentary lead the attendees through the history of ancient civilizations and their richnesses and carried a message that said: “harmony and understanding for mankind no matter, the colour, religion or race. Now peace is needed more than ever and unconditional love for every living thing on this planet”.

This above mentioned quote comes from the film, produced by the researcher in Civilization, Professor Ahmed Omar, a specialist in holistic health, resident in Norway, and a member of the European-Arab Center for Multiculturalism, where the film was documented on behalf of the European Council.

Ms Myriam Zonnekeyn, a Belgian spokesperson for the Churches of Scientology for Europe, was tasked with welcoming the guests on behalf of the Church, and the conference was continued with a series of speeches by distinguished guests: a group and an elite of international civil society figures, international organisations and global media, as well as a group of global scientific expertise.

The interventions of the members of the group named “Interaction” (Interazione) from Sardinia (composed of members of many different religions), emphasized how much they work on the subject of cooperation in Sardinia. The first speaker was Nicola Oi, who stressed how, through the application of the precepts of The Way to Happiness, the non-religious moral code written by L. Ron Hubbard, as well as the dissemination and implementation of the Universal Declaration of Human Rights, the “Interaction” group strives to cultivate respect, brotherhood and peace.

Dr Mohamad Doreid, who is also one of the founding members of the European-Arab Centre for Multiculturalism, deepened on the necessity to create paths of cultural mediation through the narration of the activities that it carries out with the University of Cagliari creating connections with European Universities and of various countries of the Mediterranean. Dr Doreid made it easier to understand the need for mediation through comparison with codes of the Laws from the times of the Governors and Legislators who changed the path of ancient and current history.

The speeches of Dr Maroun Karam, representative of the Maronite Central Council in Europe and of Dr Eya Essif, Secretary General of the United Towns Agency for North-South Cooperation (NGO with Special Consultative Status to the UN ECOSOC), always in support of the need to create channels of peace and cooperation in multiculturalism.

The Forum concluded with thanks for the participation to each speaker and member of the European-Arab Centre for Multiculturalism with the awareness that each participant will take care further disseminate the messages given, with new relationships that have been born and through which the message will be more redundant. Participants concluded the event with the commitment to be a source of messages of peace, cooperation and willingness to unite people regardless of the country of origin, cultural origins or religion.

Article originally published on www.einpresswire.com as Scientology hosted in Brussels the ” 1st International Forum for dialogue between civilizations” of Euro-Arab Council