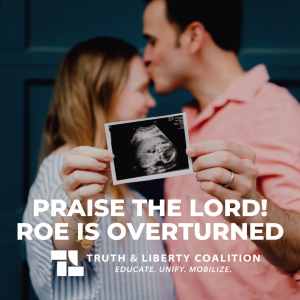 Now that we are in the Third Great Awakening, we may see the end of abortion in this generation—but it will take the Church working together to see it come to pass.”

In the Dobbs v. Mississippi Women’s Health case, the Supreme Court sent the issue of abortion to the states to decide. In a majority decision, Justice Samuel Alito wrote, “The Constitution makes no reference to abortion, and no such right is implicitly protected by any constitutional provision.”

According to Andrew Wommack, president of Truth & Liberty Coalition, “While this is a time of rejoicing and expressing our gratitude to the Lord for the brave men and women who made this decision, and all the people who have worked against abortion all these years, we also have to stand strong in the power of His might (Eph. 6:10)—because our work isn’t done.”

Dozens of states already have pro-life laws ready to enact in wake of Roe’s reversal, but Colorado recently passed the most aggressive pro-abortion bill in the nation—allowing the murder of babies in the womb up to the moment of birth.

According to Richard Harris, executive director of Truth & Liberty Coalition, “This is an incredible and wonderful day in the history of America! In Isaiah 28, the prophet laments that Israel made a covenant with death but prophesies in verse 18 that God will disannul that covenant and bless the nation. Today, our national ‘covenant with death’ has been disannulled. Hundreds of thousands of innocent lives will now be spared in states with the moral clarity and courage to restrict abortion.”

Standing for biblical truth, supporting pro-life legislation, and electing strong constitutional conservatives at the local, state, and federal level will be key in protecting the rights of the unborn and ensuring “life, liberty, and the pursuit of happiness” for all Americans.

“Now that we are in the Third Great Awakening, we may see the end of abortion in this generation—but it will take the Church working together to see it come to pass,” said Wommack.

For more information and resources on the right to life, visit TruthandLiberty.net/Resources.

About Truth and Liberty Coalition:

Truth & Liberty Coalition, Inc. is a 501(c)(4) non-profit based in Woodland Park, Colorado. Established by Andrew Wommack and other Christian leaders, the goal is to educate, unify and mobilize Christians and conservatives to become involved in the affairs of their community and government. [https://truthandliberty.net]